aside Artist Gonny Glass shatters the silence on violence against women

Gonny van Hulst was raised in the Netherlands and describes her upbringing as turbulent. Spending her teenage years as a hard core punk and amercing herself in the scene, whilst still allowing time to work as a volunteer in shelters for runaway girls between the ages of 12 and 21. Many of the girls had run away due to physical and sexual abuse. A dramatic life change for Gonny occurred when motherhood was experienced with a beautiful daughter. Gonny threw herself into the world of aerobics and body-building and became a self employed fitness instructor achieving 3rd place in the Iron Maiden Body-building Contest in the Netherlands.

Gonny and her daughter moved to London in 2002 and several years later the creativity struck and Gonny was excepted to the University of Creative Arts at the age of 43 and began her new life as a mature student studying 3D design in Glass and graduated in 2011 with a first. Now working as an artist at The Second Floor Studios & Arts in Woolwich, London where Gonny can create her powerful art and hang out with her amazing Chihuahua Maus.

We asked Gonny why she chose the topic of violence against women:

“The topic Violence Against Women is very close to my heart, millions of women around the world are faced with violence, discrimination, exploitation, sexual abuse and unworthiness every single day of their lives. I find it hard to believe that in this day and age women are still treated as second-class citizens.”

Gonny went on to explain why our mission at ASLI  caught her eye and why she was eager to be involved:

“I wanted to take part in this campaign because I feel passionately about raising awareness of violence against women and by showing my artworks I hope to highlight the tragedy of domestic abuse and to emphasise the real importance of not ignoring this prevalent yet under-recognised issue.”

What does the statement ART SAVES LIVES mean to you and has art in anyway “saved” your life in any way?

“I see creating art as therapy; it helps me escape the chaos in my head. Art has become a way for me to express myself, a way to communicate with others as I find it really hard to open up emotionally and talk about my feelings.”

Gonny believes her art is a powerful tool to change perceptions and attitudes on important world issues using art as a creative outlet for her thoughts and views which can be better communicated by art than words. This is one of the fundamental reasons that we at ART SAVES LIVES INTERNATIONAL chose Gonny Glass as we feel not only is her art important and challenging but it is her beliefs on art as a communication tool that made us feel it was nessary to share her work.

“The inspiration for the artworks ‘Broken Promises’, Love & Hate’ and ‘No Hard Feelings’ came from a personal experience as I am too a survivor of both child sexual abuse and domestic violence. I think it fits perfectly within ASLI’s mission.”

When Gonny goes to create her art she starts with an idea and allows for the process to find a workable mock up often using photo-shop. Then the decision on materials becomes a focus, Gonny uses glass in her work however finding complimentary materials is all part of the artistic development.

I am also interested in the experimental possibilities of glass-making processes. I use both traditional and contemporary techniques, such as lost-wax casting, kiln-forming, slumping, stained glass and printing on glass combining it with other materials including found objects and ready-mades and although working with glass is very much technique-driven, the work must have a strong merging of content too.

Gonny goes on to explain why she chose the medium of glass:

“I am intrigued by the contradictory qualities of glass, like life itself, it can be extremely challenging to work with. Glass is unpredictable and fragile but at the same time it is a fascinating material, powerful and seductive.”

This talented artists is inspired by her surroundings, memories of childhood and life experiences. Street art is of particular inspiration to Gonny as the context within an urban environment is appealing. Adding that:

“With ASLI’s topic, the following two female artists are my favourites:  Conceptual/pop artist Barbara Kruger (US) and contemporary glass artist Silvia Levenson (AR), their work deals with and questions the viewer about feminism, sexism, consumerism and social issues. I think the art of these female artists is very powerful.”

So we wanted to ask Gonny about here views on “Women’s issues” or as we like to call them WORLD ISSUES.

What does feminism mean to you and do you consider yourself to be a feminist?

“For me feminism simply means that all people should have equal social, economic and political rights, regardless of their gender, race or beliefs. Growing up in the 70s & 80s I’ve always thought that gender roles were a crazy concept. I was part of the Dutch punk scene and as a young woman I had a lot of things to be angry about and shout a loud. Being the lead singer in a hard-core anarcho punk band (Anal Terror) helped me raise my voice; our lyrics challenged violence, sexism, war and inequality. Playing in a band and seen as an equal by my peers was empowering for me, here I could take control do what I wanted and be myself, that was pretty awesome. I consider myself a feminist because I’m a woman who believes in standing up for the rights of myself and that of others as human beings.”

Do you feel women have to conform to social norms and stereotypes to be taken seriously?

“Gender stereotyping is quite deeply ingrained in all of us. And yes, I believe that some women still feel the need to fit the stereotype in order to be taken seriously. For me this was very much evident when I did bodybuilding, I encountered prejudice from both men and women who didn’t understand why I would choose to mutilate my body in this fashion, it was not very girly-like, right? At my daughter’s primary school, some children and even adults thought I was her daddy. I think it’s fair to say that I never really fit the stereotype society projects on me, not then and not now!”

Do you think that women and men are equal in today’s societies around the world?

“Yes, it’s true that women are better off today, but they are still far from being equal with men, like discrimination, opportunities and pay. In the art scene I hang out with now I don’t feel that there are prejudices against female artists or women in general, although there aren’t many female artists that are making it into the museums and major galleries. I’ve read somewhere that every artist in the top 100 auction sales in 2012 was a man, and just 8% of public art in London was created by women…that’s just crazy. Personally, I don’t give much of a shit about fitting in or what men think of me. I hate inequality and like I said before it is beggars’ belief that in this day and age women from all over the world are still treated as second-class citizens.”

ASLI support many important causes and campaignes. Gonny too is passionate about other causes and has a particular interest in animal welfare as well as womens rights and issues. Using social media Gonny shares important information and news stories to engage people to get involved more.

“At the moment I’m working on a project for an art exhibition for an animal charity.”

Gonny Glass’s goals as an artist are to keep improving her skill set and amercing herself with the process of her craft, creating her own artistic vision to share with the world. Wanting to evoke emotions in her audience and allow for a connection to be experienced with her art.

Finally we ask what is next:

“At the moment I’m working on new body of work for an upcoming exhibition in May entitled ‘Fragile City’ at the Ben Oakley Gallery in Greenwich. I will be exhibiting together with photographer Sam Warr. It’s going to be a great show, so check it out! Also very excited to announce that I am going to be exhibiting in a great new art show entitled ‘The Fall of the Rebel Angel’ in Venice during the Venice Biennale.”

And why not support Gonny on social media

It is April and this month is Sexual Assault Awareness Month

The goal of SAAM is to raise public awareness about sexual violence and to educate communities on how to prevent it. Since 2001, the NSVRC has provided resources to help individuals and organizations plan SAAM activities in their communities and play a role in prevention throughout the year.

ASLI is joining this campaign this month and want to highlight any art that has come to us on sexual violence. Even though we are UK based we are an international organisation and believe that joining other campaigns such as this one in the United States is important as a wider global community. 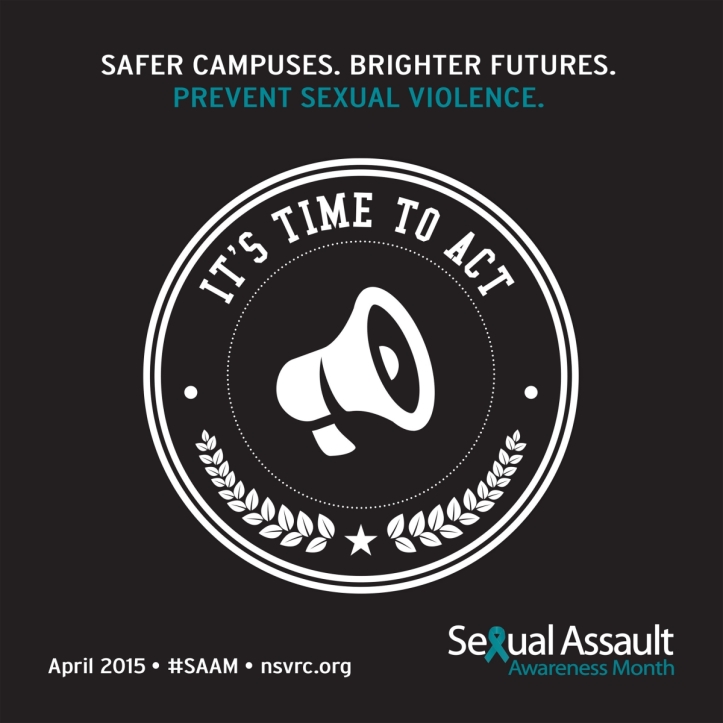 Sexual violence is a major public health, human rights and social justice issue. We need everyone’s help to end it. 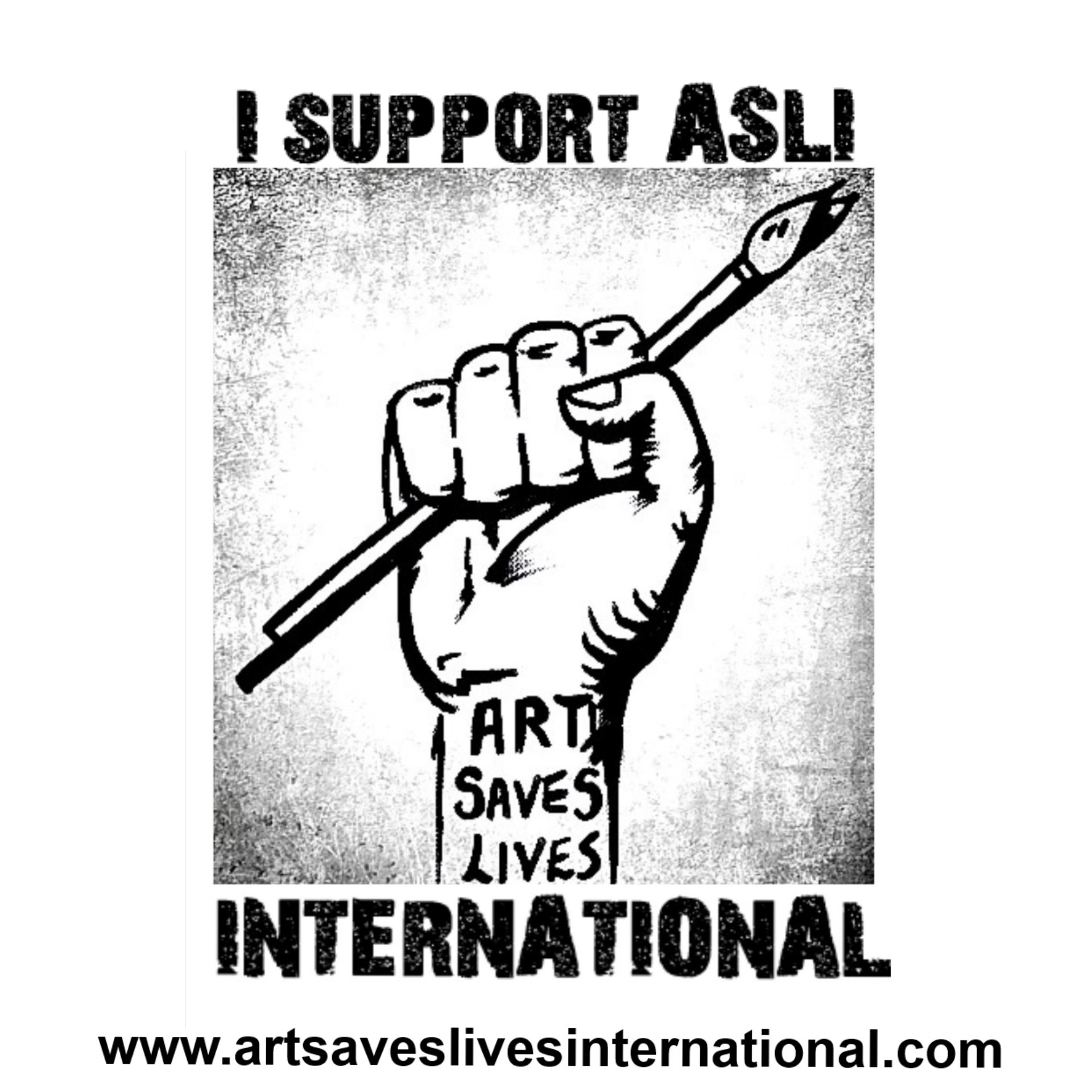